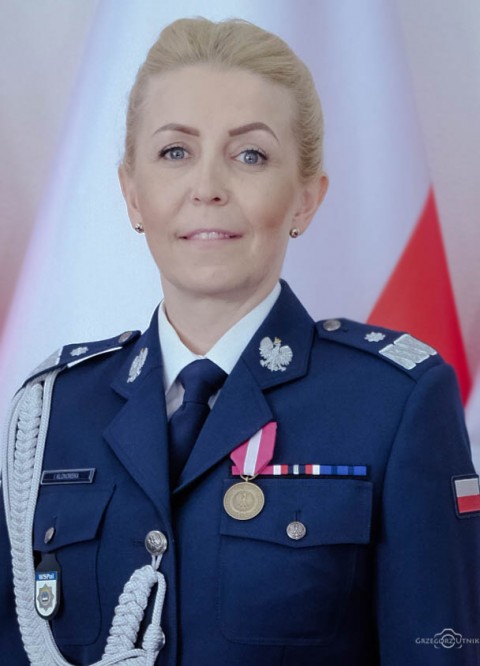 Brig. Gen. Iwona Klonowska, Assoc. Prof. began her service for Police in 2000 as an officer of the Warsaw Metropolitan Police where she  worked at the Division for Prevention at the Section for Young Offender Matters.

Over the following years of her career, the Head of the Police Academy was among others a lecturer at the Police Training Centre in Legionowo, the spokesperson of the institution and later on, counsellor in  the Team of Psychologists that she managed. In the next years she conducted the Section for Social Communiaction and the Psychological Department of the Police Training Centre in Legionowo. She was the creator and the the Editor-in-Chief of the Police Quarterly at PTC. She served on the position of the Deputy Commandant for Didactics at PTC.

Since July 2014 she performed her service at the General Police Headquarters as the Head of the Department of Social Communication at the Cabinet of the Chief Commander of the Police and as the Editor-in-Chief of the periodical ”Police 977”, next as the Director of the Department for Social Communication of the General Police Headquarters.

Her profession is psychologist and special education teacher. She is a graduate of many post-graduate studies. In 2018 she obtained a habilitation degree in the field of social sciences. She is a long-serving academic teacher. She is authorised to conduct research in Transport Psychology. She is an NLP, SI, Art trainer. On 5 March, 2020, she was appointed by the Minister of Internal Affairs and Administration to the position of the Commandant-Rector of the Police Academy in Szczytno. On 23 July, 2022, during the Central Celebration of the Police Day, Col. Iwona Klonowska, Assoc. Prof. was promoted to the rank of the brigadier general by the President of the Republic of Poland Andrzej Duda, at the request of the Minister of Internal Affairs and Administration .

During her career, the new Commandant-Rector of The Police Academy in Szczytno has been awarded with the bronze Medal for Long Service as well as the bronze, silver and gold Medal of Merit.